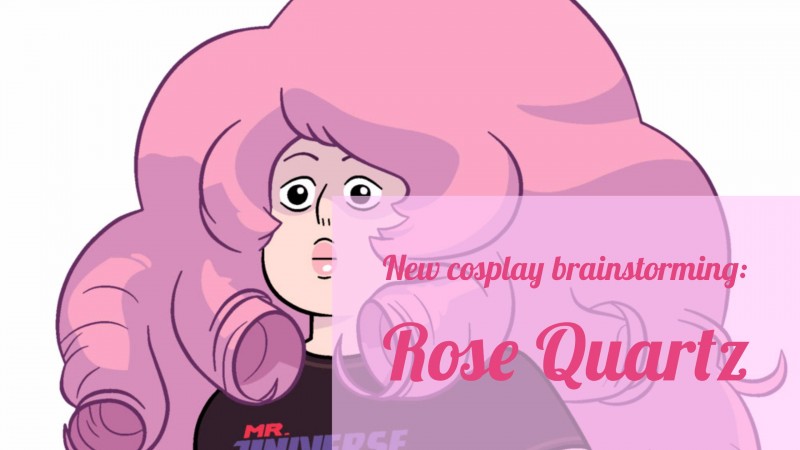 Maybe I just like to dress up as pink haired characters.  Maybe I really am obsessed with Steven Universe.  Either way, it’s led me to my cosplay idea for this year’s conventions (yes, I’m actually going to make it to at least ONE convention this year, if it kills me or not) – Rose Quartz, from Steven Universe.  Finally, someone I can cosplay as who has a similar body shape to mine!  (Although I don’t think I’ll ever be 8 feet tall…)  Someone I can cosplay as and not feel so self conscious about!

I’m going with this version of Rose for a few reasons:

So!  I’m going to try and get Mr. Universe T-Shirt Rose ready, maybe, by Indiana Comic Con.  Despite me swearing I’d never go again, they’ve got a number of people I’d want to see this year, including Cary Elwes (!), Millie Bobby Brown, Nichelle Nichols (!!!), and two voice actors from the original dub of Sailor Moon!  (They’d better be more organized than they’ve been in the past…)

This cosplay is going to be pretty easy for me to assemble, I think.  I’m going to need the following things:

I think the wig actually might be the toughest part, as it’s gonna need to be BIG.  I’m hoping I can find something on Etsy, like Ross did for his Rainbow Dash wig, but I’ve got a few ideas for backup wigs that might work in a pinch.  I think this wig, albeit expensive, will be perfect… … plus, there’s the added bonus of being able to stick my Pinkie Pie ears in said wig and use it for any Pinkie Pie cosplay I end up doing in the future!  Everything else should be pretty easy – Mr. Universe shirts are easy to find, I’ve got a Jo-Ann Fabrics within scootering distance (once my poor scooter is functioning again, anyway), and I know I can find giant hoop skirts on Amazon.

I am super excited for convention season this year.