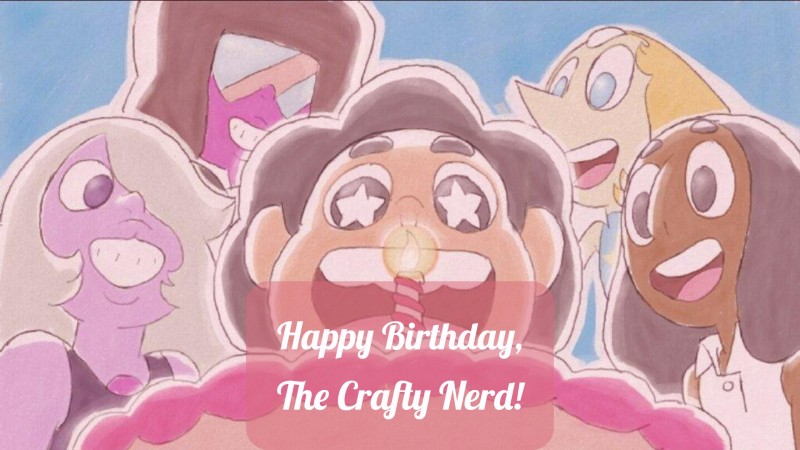 Holy crap, has it really been four years since I started the blog?

A lot’s happened in the past four years.  And I tend to ramble about all the stuff that’s happened since I started the blog almost every time it celebrates a birthday.  (Although somehow, I manage to cover something different each year – how do I manage that?)  This year, I’m just going to focus on the awesome things – crafty, nerdy, and life-related – that have happened since the blog’s last birthday!

Since The Crafty Nerd last celebrated a birthday, I’ve…

Ayup, it’s a match made at Gen Con.  And I couldn’t be happier.  That’s not the only thing I did since Crafty Nerd last had a birthday.  I also…bought a house.  Yes, no more renting, and hooray for having a permanent craft room!  (In Mia green, no less.)

I also BOUGHT A NEW CAR. (And sold Janeway.)  And am in the process of (slowly) learning how to drive it.

I also crocheted a heck of a lot of stuff.  From baby blankets to sweaters to an amazing wedding shawl, I made a little bit of everything.

I also got into bullet journalling!  Which is a crafty nerd/planner nerd’s dream.

I also only posted maybe twelve entries last year.  Which was not quite so good.  I’m going to fix that, though.  So far, I’ve been putting out a post a week, and I plan on keeping that up through the rest of this year.  Whether it’s bullet journal rambling, to showing off craft projects, to sharing crochet patterns (I’ve got a simple one in the works!), I’m going to have something up every single week!

So, thank you to everyone who’s been reading over the past four years, and to the 157 people who like The Crafty Nerd’s Facebook page!  (And I promise I’ll add more to that, too, without being hugely overwhelming with my posts. :P)  You guys are all wonderful, and the reason I keep posting things and crafting up new things. 🙂 [emoji purple heart]