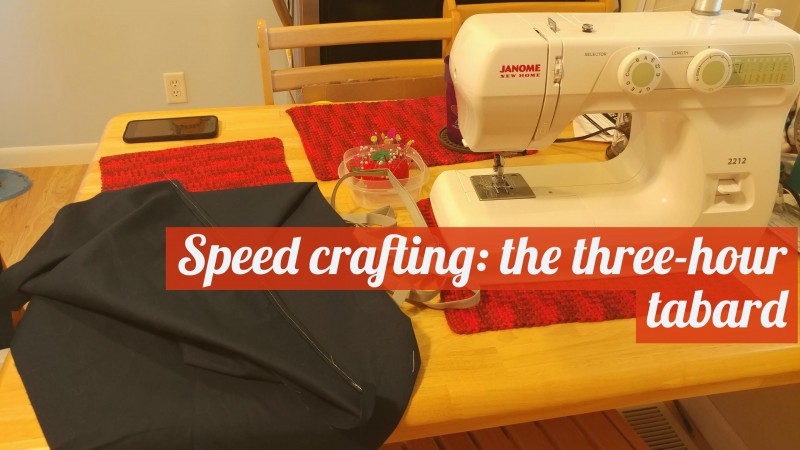 Sometimes, you just have to spend three hours of your evening helping a friend out with some speed crafting.

In this case, my friend J (who runs the Kishar LARP I’m part of) was feeling a little panicked by the fact that he’s got a Game of Thrones LARP to go to this weekend, and didn’t have time to make a tabard to go over his leather armor to match his house’s colors.  With all the other things he had to tackle before Saturday, what was he to do?

Enter the Crafty Nerd and her trusty sewing machine! I volunteered to put my new Janome sewing machine to work and see if I could possibly crank out a tabard for him before Saturday.

J and I took a quick trip to Jo-Ann Fabrics on our lunch break on Thursday and picked up what I’d need to crank out a tabard in three hours:

… Okay, I guess the planner stuff did come in handy, as I did use the planner to, well, plan the design, hah.

And after work, I set out to put together the tabard – with no pattern, guesstimates on the supplies, and a deadline of 24-ish hours.

This little project was not without its complications.  First, I found out we didn’t have quite enough bias tape to do both the outside edge of the tabard and the neckline.  I fixed that, however, by making some bias tape of my own from scraps of fabric leftover from cutting the tabard to size.  However, sewing that bias tape on the neckline was another story.  This was my first time ever working with bias tape on a sewing machine, and oh man, you can tell that by the weird gaps that popped up when I went around a corner with the machine.  There were two spots that just didn’t get sewn to the bias tape – so I had to very carefully stitch things together and hope it all stays together.

Another issue: I ended up being one inch short on bias tape on each side.  Grrrrr.

The fix to this: make the tabard a little shorter!  In the end, the tabard came out looking… far better than I expected, honestly.  It’s the first time I’ve made a piece of costuming in a long while, and I’m glad to see I did a good job with this tabard on such short notice!  And for something that only took three hours to make, it looks pretty epic!

And there’s the tabard in action!  I think it looks pretty darn good.  I might be biased, though, since I made it. 🙂

Like Loading...
chevron_left Kickstarter: is it worth it to back a project?
The return of Startitis chevron_right