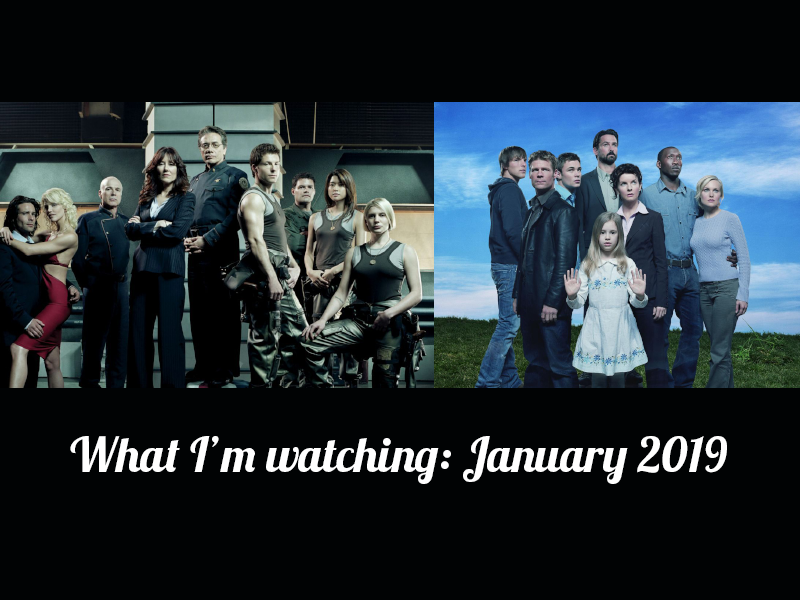 Hi folks, and Happy New Year!  You might remember a post I made a few weeks back, about some resolutions I made for the blog for the year — one of them was writing more reviews, especially for TV shows. I watch (or at the very least, listen to) a lot of TV while I’m crafting, and I mean a lot. While I don’t know that I’d be able to write great, in-depth reviews on the shows I’m watching, I could at least share some of the shows in my Netflix and Hulu queues and share my thoughts on the shows without too many spoilers.  (And possibly share some shows I tried out but didn’t quite get into.)

So, here’s what I’m watching this month: Battlestar Galactica and The 4400. Battlestar Galactica is a show I’ve been meaning to watch, well, since it came out almost 15 years ago. I had friends in college who were obsessed with it, and I’ve had friends in the years since who were big fans. When I started dating Ross, he was working through re-watching the series and was somewhere in season 2 before Neftlix lost the licensing to it.  Now it’s on Hulu, and we’ve started watching it together as our evening “let’s watch this together” show. I’m sure most of you readers have at least heard of it before, but if not, here’s a short summary from Hulu (who explains it better than I could):

Battlestar Galactica continues from the 2003 mini-series to chronicle the journey of the last surviving humans from the Twelve Colonies of Man after their nuclear annihilation by the Cylons. The survivors are led by President Laura Roslin and Commander (later Admiral) William Adama in a ragtag fleet of ships with the Battlestar Galactica, a powerful but out-dated warship at its head. Pursued by Cylons intent on wiping out the remnants of the human race, the survivors travel across the galaxy looking for the fabled and long-lost thirteenth colony: Earth.

We’ve only watched the first six episodes (and the miniseries) so far, but I’m already ridiculously attached to many of the characters. When Starbuck ended up in mortal peril in episodes 4 and 5,  and then managed to get herself out of it and back to Galactica, I cheered with the rest of the crew and got a little misty-eyed. I feel for President Roslin and Commander Adama as they make some tough decisions in order to keep what’s left of humanity alive and safe. I’m always looking forward to the next episode — and I’m glad Ross and I are watching an episode or two a night so I don’t binge-watch the entire thing over a weekend.  I like being able to enjoy each episode, process it, and then go watch the next episode tomorrow.

The 4400 is a show I stumbled across on Netflix while trying to find something to watch while crafting.  I’d just blasted through Season 3 of Travelers (a show I really enjoy) and was looking for more sci-fi to watch, and Netflix suggested this.  The premise seemed alright (albeit a little cheesy): 4400 people, each of whom disappeared in a beam of light anywhere between 1938 and 2001, are deposited on the shores of a lake in Washington state by a bright ball of light.  None of these people have aged a day since their disappearance, and some of them have come back with special powers (such as the ability to heal or see the future).

The show follows Tom Baldwin, an agent of the National Threat Assessment Command (NTAC) as he and his partner, Diana, investigate events involving the 4400.  It also follows a handful of the 4400 themselves, including the following:

While the show does have some cheesy moments, it’s pretty enjoyable.  It also doesn’t hurt that the show’s creator, René Echevarria, was a writer on Star Trek: Deep Space 9, and one of the producers (Ira Steven Behr) also worked on DS9. (And speaking of DS9: Jeffrey Combs, who plays Weyoun and Liquidator Brunt in DS9, also stars in The 4400!) I’m in the middle of season 3 right now (I think I started the show sometime last week), mostly due to all the time off I’ve had recently, and I’m curious to see where the show ends up going.  If you’re looking for something in the sci-fi realm to watch and don’t mind if the show gets a little silly at points, you should try The 4400.

Like Loading...
chevron_left Five free craft patterns to keep busy with over the holidays
Another new hobby – Magic: The Gathering chevron_right