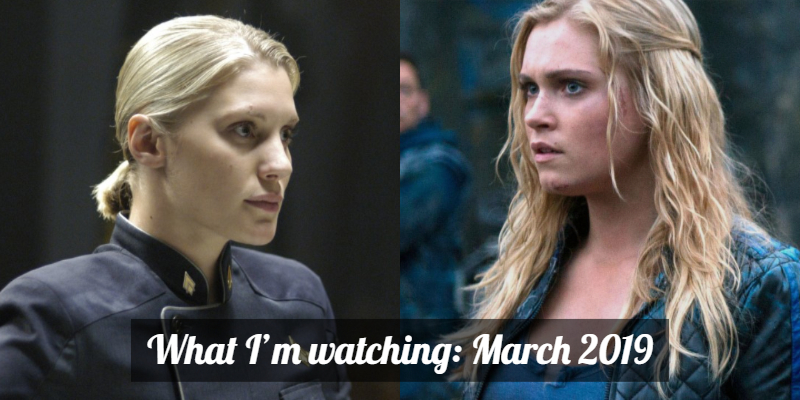 Here’s the March edition of What I’m Watching! Only two shows this month, but I’ve got a lot to say about both of them.

First off, I’m still watching Battlestar Galactica – I’m in the middle of season 3, and oh my god the feels. Not just about what’s going on in the show, but about the entire show in general. I’m not sure how many of my readers have already watched Battlestar Galactica, so I’m not going to talk about potentially spoilery things, but I will talk about some of my favorite aspects of the show.

One of those favorite aspects is how insanely talented the entire cast is. I may dislike some of the characters – Gaius Baltar, I’m looking at you – but gods, when it comes to playing Gaius, James Callis does an amazing job of bringing that beautiful idiot to life.  It’s the same with all the actors – I can’t think of a single one that makes me think “ugh, this guy again?” Plus, all the characters are so human – the entire show is full of the characters doing what they think is right.  There’s no black and white, no absolute wrong or absolute right. President Roslin, Admiral Adama, Starbuck, and Lee, everyone’s so human it almost hurts at times. Everyone’s just trying to do what they think is right. And each actor looks like they’re pouring their heart and soul into their roles, and it makes for one hell of a compelling story.

Speaking of characters being human: I love how Admiral Adama is a father figure to practically everyone on Galactica. (There’s a reason I call him Space Dad!) Sometimes that results in rough situations, especially with Lee, and sometimes it results in such heartwarming scenes that it almost makes me want to cry.  Space Dad is best dad.

I haven’t just been watching Battlestar Galactica, though. I’ve also been watching The 100, a show I started a few years ago when only season 1 was available on Netflix. I recently picked it back up again, and I’m really enjoying this show too.  So far, I’m in the middle of season 3, and the show definitely evolves over the course of the episodes I’ve watched – it’s gone from “juvenile delinquents doing stupid things while trying to survive in the woods” to a really solid and interesting sci-fi drama.

The show takes place almost 100 years after a nuclear disaster wipes out almost all life on Earth, and starts out in space: specifically, on the Ark, which is a massive space station constructed from existing stations after humans fled the disaster and went to space. Humans have been living on the Ark since the nuclear disaster occurred, and things aren’t going all that well when the show starts.  Overpopulation is becoming a problem, and while steps have been taken to try and slow down population growth (couples can have only one child, and criminals are sentenced to death by getting sucked out an airlock), the Ark is still in trouble: specifically, their oxygen supply is dwindling, and drastic measures must be taken to keep everyone on the station alive. Chancellor Jaha and his advisory council think that maybe Earth might be an option, but they want to make sure that the planet is safe before they send everyone down there to make new lives.

Enter the 100: a collection of kids and teenagers who’ve been put in detention for various crimes they’ve committed, all waiting until their 18th birthday to be re-evaluated and either released back into the population, or “floated” out an airlock. Instead of keeping all these kids and teenagers around until they hit 18, they’re chosen for a special mission. The 100 are sent down to Earth to see if the planet is livable again. The first part of the first season focuses on the 100 as they deal with their new situation, and find out that they might not be the only humans that survived.

The cast is full of talented actors, and includes some of my favorites, like Alessandro Juliani (also known as Felix Gaeta from Battlestar Galactica) and Henry Ian Cusick (who played Desmond in Lost). The story is really gripping, and I really love where the writers are going with the plot.  Speaking of writers: The 100 is based on a series of young adult fiction books by Kass Morgan, and I definitely enjoyed the books – but after book 1 and the first part of season 1, things really start to diverge.  It’s been interesting to see how very different the show is from the books, and see what the show writers do with the source material that Kass Morgan wrote.

And that’s what I’ve been watching this month!  Stay tuned to see if I ever finish Battlestar Galactica, or to see what other shows I end up picking up along the way!

Like Loading...
chevron_left Review: Stardew Valley (the mobile version)
My new toy: a laptop actually made for gaming chevron_right