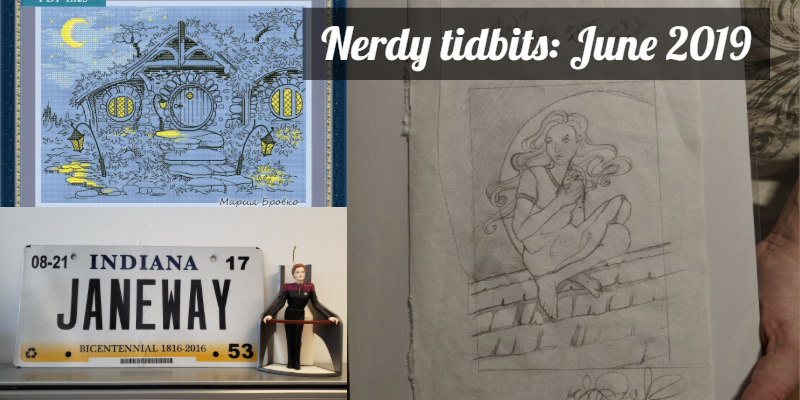 Well, we’re almost at the end of June, which means it’s time for another edition of Nerdy Tidbits! Read on to learn more about the fun nerdy tidbits of June 2019 that didn’t quite fit into their own posts!

A crafty and nerdy tidbit: Picking up cross stitching again

Oh, cross stitch. Back when I was younger, it was one of the first crafts I picked up, along with sewing and knitting. I really enjoyed making cross stitch projects, but was never very good at finishing them. (For example, I’ve got a Sherlock wallpaper cross-stitch project I’ve been working on for my friend Josie’s birthday for… four years now?) Eventually, I told myself that after I finished the two projects I had in progress, I was done with cross stitching for a while. Since I hardly ever finish cross-stitch projects, it seemed like the best idea.

Then I found this pattern, which I thought would be perfect to make for Ross. So, I bought it and supplies to make it, and I’ve made some pretty good progress on it! I’m almost to the point where I can start all that backstitching. For those of you who are interested to see how it’s coming along, I’ll be posting occasional updates to The Crafty Nerd’s Facebook page – so if you’re not already following it, you should! If you want to make the pattern for yourself, you can buy it here on Etsy. Here’s a Star Trek tidbit for you all! My fellow Star Trek fans might remember that Captain Janeway’s birthday was last month – May 20th, to be exact. In fact, according to the show, she was born right here in Bloomington! To celebrate the occasion, I posted the picture above on Facebook – and it was shared to a group of Bloomington Janeway fans! The Captain Janeway Bloomington Collective is in the process of getting a monument to Janeway built in town. How awesome is that? Fundraising is starting soon, and if you’re curious to learn more about the monument, check out the group’s Facebook page.

An old nerdy tidbit: Echo Chernik’s Auri sketch, and where it ended up

This is an older tidbit, but one that still makes me happy. When I was digging through my Gen Con archives recently, I was reminded of something that happened at last year’s Gen Con: Ross and I getting to look at Echo Chernik’s sketchbook. Specifically, we were excited about the Auri sketch for the Name of the Wind playing card Kickstarter.

I figured that would be the end of things with that sketch, but I was wrong!

It turns out my good friend J went and visited Echo Chernik after I sent him a picture of the sketch, and he went and bought it. And it was actually in my house at one point. I may have flailed a bit when he brought the sketch over, because honestly, I never thought I’d see it again.

And last, a final little tidbit about Bloomington Stitchery -I mentioned recently that I brought my Starfleet science officer uniform over to them to get it altered. Well, this morning I had the brilliant shower thought about adding pockets to the uniform. Then I realized I should have asked to add pockets to it while I was there. (Cue me facepalming.) Of course, I rambled about it on Facebook, and they said “hey, we might still be able to do that, just email us to remind us!”

I seriously love these folks, and I can’t wait to see how my Starfleet uniform turns out! If you’re in the Bloomington area and need alterations done, you should check them out.

Well, that’s the Nerdy Tidbits for June 2019! Stay tuned for next month’s collection of tiny nerdy stories, which will probably include a lot of Gen Con prep.