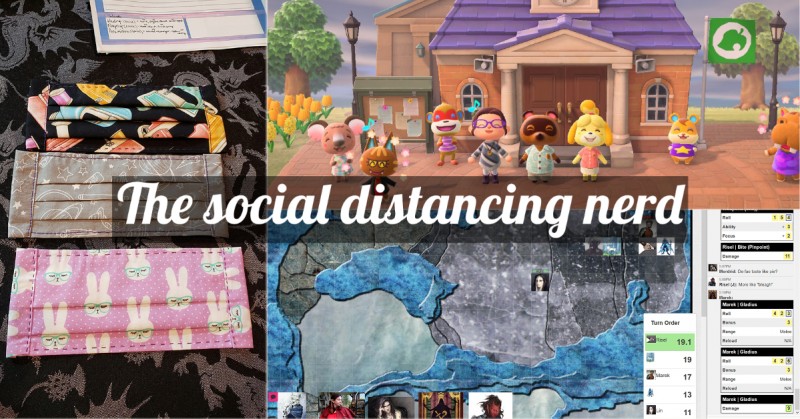 Yes, folks, I’m still here! I didn’t give up on the blog — although I’ll be honest, the past two months have been rough. I’ve been a hot mess half the time, between anxiety and depression and stress. It’s kind of hard to try to come up with topics to write about when you’re struggling emotionally, and it’s been a rough time in general for pretty much everyone I know. However, it hit me yesterday: I do have something to write about! I can talk about what I’ve been doing to help keep myself occupied while staying at home. Surprise, surprise – it’s been a lot of crafting and gaming.

I’ve been doing a lot of crafting lately. For a little while, it was the only thing keeping me sane. I only had to focus on where to put the next stitch, or how to piece fabric together.  I’ve made quite a few things since I went into staying-at-home mode in March.

I did a lot of hand sewing because, for some reason, I find it less stressful than sewing with a machine. I made a lot of face masks! Everyone’s making them, everyone should be wearing them, and I made a couple of really nice ones for myself and friends. I hand-sewed them, too,

I also picked up quilting again! With some of the leftover fabric from the masks, I started a simple small quilt that’ll likely end up becoming a wall hanging.

Yarn crafts: because I can’t just sit and watch TV

You know I’ve just about always got some sort of yarn craft in progress, too – and stay-at-home time is no different. With all the TV I’ve been watching, I need something to keep my hands busy with. I’m currently working on three yarn craft projects, all crochet:

Of course, I wouldn’t be The Crafty Nerd if I didn’t play any games! They’ve all been online for the most part – playing games online has been my primary mode of socialization over the past two months, and have been a good way to socialize while staying at home.

While my usual Blue Rose game is on hiatus, Kasi (who plays Paroum in the game J runs) decided to start her own Blue Rose campaign!

J and I and a few friends from Kishar have been playing in that game, and Kasi runs it on Roll20. I hadn’t had much experience with Roll20 before the Depths of the Weald game, but I’m enjoying it as an online alternative to tabletop games. We can use maps, I can keep track of my character sheet inside the app, and if we wanted to, we could even do video/audio chat over Roll20! (Our group tends to use Facebook Messenger’s video chat options, though.)

Animal Crossing: New Horizons — the next best thing to having an actual social life

The new Animal Crossing game came out at the PERFECT time. Everyone’s stuck at home for an indeterminate amount of time, and we needed some way to cope with it. Enter Animal Crossing: New Horizons. Not only do you get to make friends with cute animals, but you can also hang out with your real-life friends! For example, Kasi, Rana, and I took a field trip to one of our museums. We wandered around explored all the bugs and fish and fossils in the museum and took lots of pictures too.

Plus, when it’s your birthday, your animal friends throw you a party! (Yep, I celebrated my birthday almost two weeks ago, and partied with my Animal Crossing buddies Katt, Melba, and Hamlet.)

It’s silly, how attached I’ve gotten to my Animal Crossing villagers – I won’t lie, when I came back to the game after a week of not playing, and they all said some variation of  “where’ve you been the past week? we missed you!” I just about started to cry. (I won’t leave you alone again for that long, animal friends, I promise!)

Now that I’m starting to work myself out of the worst of my anxiety and depression, I’m going to try to write more. Work doesn’t drain my energy as much as it used to (seriously, while I love driving, dealing with traffic in Bloomington is stressful!), so hopefully, I’ll have it in me to write once a week again. I’m going to get the What I’m Watching series back up and running again, and while I won’t have any posts about Kishar or my other Blue Rose game for a while, I’ll try to write about the games I am playing.

Thanks for sticking with me, folks — I hope everyone’s hanging in there during these downright scary times.