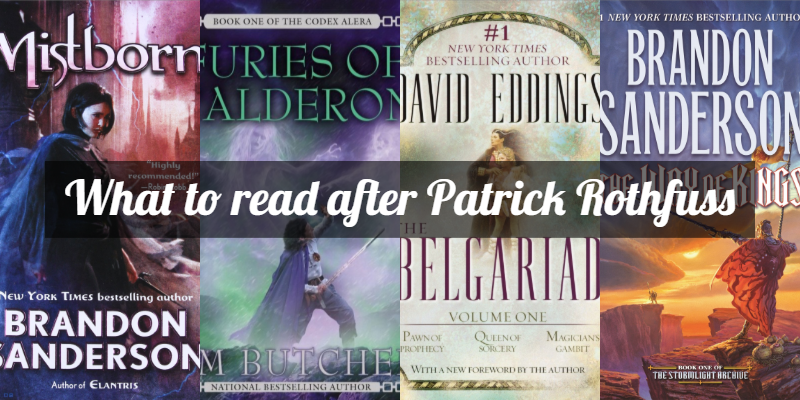 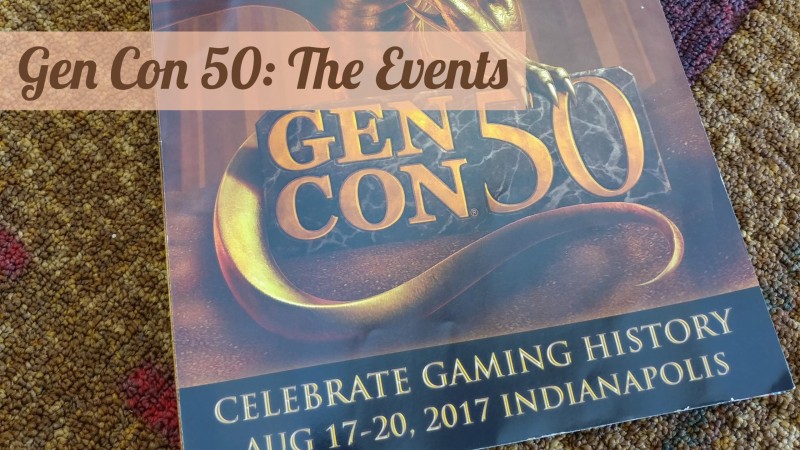 Gen Con is usually packed full of all sorts of awesome events, and Gen Con 50 was no different.  I only ended up going to a couple of events this year – I might have done more if we had a hotel, but I didn’t want to end up overwhelming myself, so I went event-lite.  (And even then, I ended up skipping two events because I was exhausted, bleh.)  The ones I did get to go to were fantastic, though – I did some crafting, some book signings, and got to introduce Ross and J to my favorite Gen Con event ever…

An Evening with Patrick Rothfuss

Of course the first event of Gen Con 50 that I went to was An Evening with Patrick Rothfuss.  It was a great way to start out the con – two hours with one of my favorite authors!  I brought Ross and J along – Ross has heard me ramble on about Pat and how awesome he is, both as an author and in general, and while J’s a fan of Pat’s (in fact, that’s how we met – J saw my talent pipes while we were at an academic conference together, and said “hey, are those talent pipes?” and I got all flaily and excited), he’d never actually been to An Evening With Patrick Rothfuss before.  So we all went, and oh, it was even better than when I went in 2013.  We all filled up a ballroom this time – the 2013 event only had 200 people, but this year there were 1200 seats with a line of people waiting outside!  It was super exciting, and Ross and J and I couldn’t wait for Pat to get on stage.

It was run similarly to the 2013 session, with him giving us the option of having a session we could record, where he’d be less candid about things and a little more censored, or we could put our phones and cameras away and we’d all get to pretty much hang out with Pat.  I don’t think anyone raised their hands when he asked if we wanted to record the session, hah.  Pat broke the session up into a couple of different chunks – he’d answer questions from the audience, with mix of notecards with people’s questions and people asking out loud, and he also read us both of the Princess and Mr. Whiffle books.  (If you haven’t read them, you definitely should – but don’t let your kids read them until you’ve seen what’s in them, haha.)  While answering questions, Pat rambled on about great things – mental health, raising kids, silly random things, and life in general.  I especially appreciated his discussion on mental health – as someone who deals with anxiety, depression, and ADHD, it’s good to hear one of my favorite authors publicly encouraging people to go to therapy – even if they don’t really think they need it.  Having someone to talk to about life and all that goes on in it, someone who’s not currently connected to everything you’re experiencing and can provide an outside perspective, is pretty much essential to keeping yourself emotionally in good shape.  I love that Pat cares about us all enough to tell us “go to therapy!”

Things weren’t all seriousness, though.  He told us some adorable stories about his kids, and even sang to us in the process!  He sang a couple of songs, very briefly, from the Rankin Bass version of The Hobbit, which was great. (And reminded me that I really need to see that version of The Hobbit.  I’ve got it on DVD somewhere…)  The questions from the audience were great, and the more amusing ones that stuck out in my mind included “Can I go to dinner with you?”, “Could you have Lin-Manuel Miranda call my wife?”, and “If you had to choose between breaking both your legs and eating 10,000 Go-Gurts, which would you choose?” J asked a question that made me giggle – “If you were to cast a live action version of Slow Regard of Silent Things, who would you cast for the inanimate objects?”  Pat initially responded with Nathan Fillion, which got us all cheering, then he thought about it, realized we were cheering because we all love Nathan Fillion, and changed his mind to Keanu Reeves, which was actually way funnier, hah.  (Oh, Keanu Reeves and your uninspired acting…)  Much like the 2013 event, the evening ended with all of us singing together – which was delightful.  I’m really glad I managed to get tickets to this event.

This was a great workshop, put on by the fine folks at …And Sewing is Half The Battle!  I learned so much about new materials for making cosplay props and armor, and new ways to use materials I’ve worked with before, like craft foam.  And I picked up some techniques to make things look their best, and also learned how to be safe while working with some slightly more hazardous materials.  I even got the chance to work with some Worbla, which I’d never used before!  I also found out I probably need to add a heat gun to my crafting arsenal.

The folks at …And Sewing is Half the Battle did a fantastic job with the workshop, and were really thorough – they showed all sorts of materials to work with, talked about the pros and cons of each, and detailed any safety measures you might need to take when working with certain materials.  I hope Gen Con gives them a bigger room next year – this one definitely needs more space for everyone to work in, especially when we’re trying to use heat guns, haha. It was overall an awesome session – and it’s given me lots of ideas for next year’s costumes!

I only recently got into Sanderson’s books, and have been reading them pretty much since May – I tore through all six books of Mistborn, and then the two books of The Stormlight Archives.  (I’m now very eagerly awaiting the third Stormlight Archives book!)  His books are pretty darn awesome, and his writing style pulls you into the story and just won’t let go.  When I found out he was going to be at Gen Con, I knew I’d have to get a book of his signed – so I grabbed a hardcover copy of Mistborn: The Final Empire and on Saturday, I made my way over to his book signing.  I had lots of fun geeking out with other fans in line, especially over the end of Words of Radiance (don’t worry, I’m not going to spoil anything!).  It’s always fun to talk to people who share common interests with you!  When it was my turn to get my book signed, Sanderson was incredibly friendly, and he even commented on my Denna costume, from Pat Rothfuss’s Kingkiller Chronicles, with all of her names on a name tag, haha.  He told me to tell Pat Rothfuss that he doesn’t have to worry about releasing the third book in the Kingkiller Chronicles anytime soon, as he’s got a 3rd book in a fantasy series coming out this year so Pat can take his time, which made me giggle.  I really like how friendly Sanderson is – he was very approachable, and really warm and welcoming!  I’ll definitely get more of his books signed if he comes back to Gen Con next year.  (Which I’m pretty sure he will.)

This was a nice, relaxing event.  I’m really glad I signed up to do this.  I got to sit and paint for a little while, and chat with other Harry Potter fans, which was lots of fun!

These are some really nice ornaments – they’re made out of clay, and were fun to paint, albeit a little fiddly in some spots.  My painting job was… less than stellar in some spots, hah.

This turned out to be such an epic event for me that I’m going to make it into its own post. So stay tuned.

In short, I had loads of fun at all the events I went to this year – and I’m seriously pondering hosting some sort of crafting event next year…