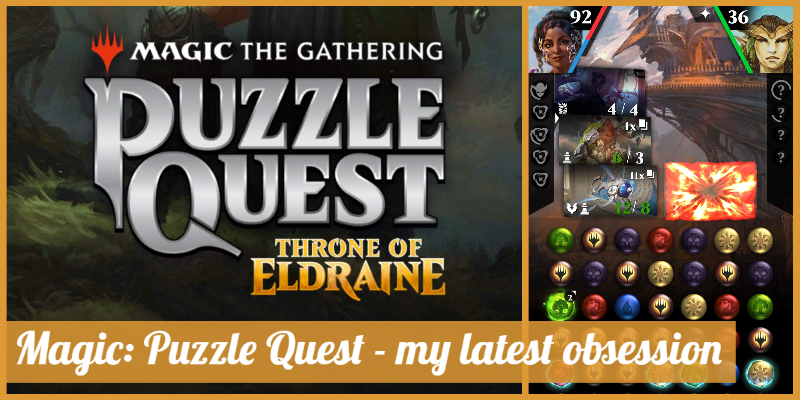 A little about the game

One of the core features of the game is using Planeswalkers and their abilities to help augment your puzzle-solving. When playing, you choose a Planeswalker to play with, and you end up fighting other Planeswalkers as you go through the game. Everyone starts out with Nissa as their first Planeswalker, but you can earn mana crystals (or buy them) to add more of them to your collection.

In addition to collecting Planeswalkers, you also collect cards (which probably isn’t surprising). The cards fall into three categories in Magic: Puzzle Quest – creatures, spells, and supports. The cards you collect are then used to build 10-card decks for your Planeswalkers. While the abilities each card has in the game might be slightly different than their physical counterparts, they largely align with actual cards in Magic: The Gathering, which is actually helping me learn how to play Magic a little better!

There are plenty of ways to add cards to your collection, and many of those ways are free! You can get new cards by grabbing a free booster pack every 6 hours, winning boosters as prizes in events, or buying them with mana crystals.

The gameplay is straightforward: match three or more colored orbs to earn mana and Planeswalker loyalty points that can be used to play cards or use Planeswalker abilities. A match ends when one of the Planeswalkers runs out of hit points, and the goal is to be the last Planeswalker standing. Winning matches gets you mana runes (which can be used to level up your Planeswalkers), as well as additional goodies like mana crystals and even card booster packs (if you’re playing in an event).

There are two main ways to play the game: in Story Mode, or by playing in events. Story Mode has you fighting various computer-controlled Planeswalkers while telling stories of events in the Magic: The Gathering universe. Events, on the other hand, have you playing player-created decks controlled by the computer to win all sorts of prizes. Events typically have a restriction on what color Planeswalkers you can use, and often have a theme you can build an event deck around to meet some of the criteria for winning extra prizes.

Where to find it

Curious to try it out for yourself? You can find it on the Android and iOS app stores!

iOS: Magic: The Gathering – PQ on the App Store