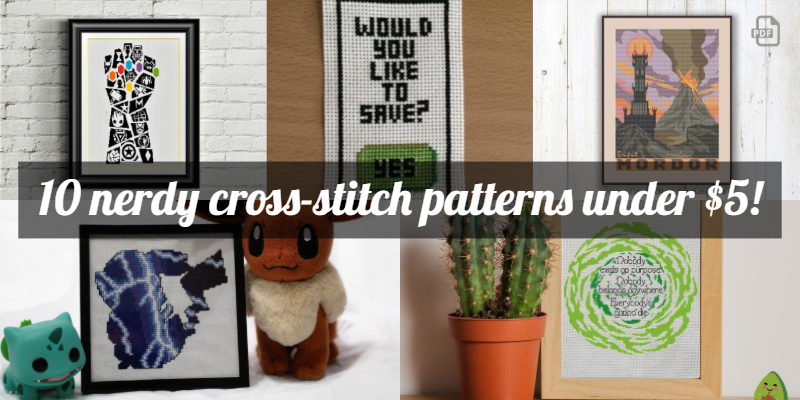 Ahh, cross-stitching – it’s one of my favorite hobbies, especially when combined with nerdy stuff. There are lots of nerdy cross-stitch patterns out there, for almost any fandom you can think of! While I’ve done free cross-stitch pattern collections in the past, today’s post features inexpensive patterns available on Etsy. In fact, each pattern here costs less than $5.00! All of these nerdy patterns are available digitally, so you can buy one, run off to your local craft store and get supplies, and get stitching right away!

Here’s what you’re here for: the patterns themselves! Hopefully you’ll find one you like!

Work has been crazy lately, hence the lack of a post last week.  Until I’ve got some bandwidth to come up with a more interesting post, here’s a little bit of something to tide you over: some little things that have made me happy over the past few weeks.

First off: I found Star vs. the Forces of Evil socks at Hot Topic! Of course I had to buy them.

Also, it might be silly, but seeing Toothless in his costume for Kishar makes me giggle.  Since the sand dragon hat I made him looks more like a baseball cap, I dressed him up with a headband and tunic, much like humans playing NPCs and monsters might dress in Kishar.  I think he’s adorable.

And I can’t forget about Mia, the best little scooter in the world!  It’s riding season, and through the help of my friend Jake at work, I got some new vinyl decals made for her.  I doodled up the designs in Illustrator, and Jake turned them into decals!

I also got to nerd out about playing Magic with one of the interns at work recently, haha.  I need to play more, but my brain’s been consumed with work.  Poor Saheeli needs more attention!  (She’s the Planeswalker for the Commander deck I’ve got.)

Oh, the fact that Detective Pikachu comes out three days after my birthday (on May 10th – which is also a bunch of my friends’ birthdays too!) makes me pretty darn happy.  I can’t wait to see it!

And finally, on May 11th, we’ve got the first official Kishar game of the season!

That’s a little bit of what’s keeping me going lately while work’s been crazy!  I’m hoping that tomorrow I’ll be able to put together a very brief “What I’ve Been Watching” post (long story short: a lot of Battlestar Galactica) for April, before April’s officially over!