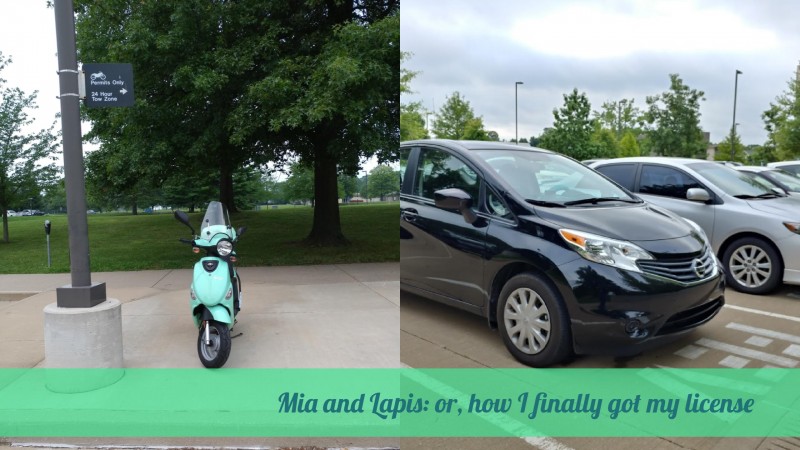 This post isn’t even remotely crafty or nerdy, so for those of you who follow the blog for my craft projects or nerdy rambles, I’m sorry.  If you’ve been following the blog for a while, you’ll notice that I do occasionally talk about my life here – and, well, some pretty big stuff has happened in my life recently.

The biggest thing: I GOT MY DRIVER’S LICENSE.

Yes, after seventeen years of anxiety, terror of piloting a vehicle at speeds faster than 20 mph, three scooters, one moped, and two cars, I’ve finally got my driver’s license.  At the ripe old age of 35.  But I did it.

For those of you who haven’t been following the Facebook page, or who haven’t had to put up with me in person the past couple of days, I’ve been sick.  Not super sick, not “oh crap I should go to urgent care” sick, but sick enough to be whiny and spaced-out.  BUT.  I know my loyal readers are looking for something, anything, to read – so, I give you the story of my new scooter – mostly told in photos. Hey, look, it’s the scooter truck!  I wonder what could be in those giant boxes that say Genuine Scooter Company on them.

It’s been a good nearly two years together.  We’ve been through a lot of good times, a couple of bad times, and one really nasty time (I’m pretty sure I shielded you from the road that one time we were in an accident together), and rode 1,730ish miles together (give or take).  You’ve taken good care of me, and I’m pretty sure I’ve taken good care of you – aside from covering you in stickers, anyway.  And that nasty spill on College Ave.  You’re my first scooter, and I love you to death.

But… y’see, I think I’ve outgrown you.

I know, I know, you’ll say “but come on, you haven’t gotten any taller!  I’m short and dainty and perfect for you!”  But over the past twoish years, I’ve been learning about what I really need in a scooter.  I need something that, while being a 49cc scooter, can go up hills without sounding like it’s having an asthma attack.  Something that can go from zero to useful in a short amount of time at a stop light.  Something that doesn’t piss off the drivers behind me because I’m slowly making my way up to 35 miles an hour after turning onto a new road.  I also want something a little bigger, something a little taller, something a little zippier, something a little more reliable.  (And I’m not saying you’re not reliable!  I am, however, saying that you have been in the shop a couple times over the past two years, and I’ve heard Honda Metropolitans have certain things that get problematic as they age.)

I’m getting a Buddy tomorrow, Scooterlou.  And you’re going to end up finding a new home.

I’m working on a much more interesting and much larger post – on my recent trip to Chicago, no less, and about music nerdery – but until that’s all ready, I’ve got a tiny little tidbit for those of you who love hearing about my scooter (or who’re just curious about her).  I’ve started up a little Blogger blog, Go Scooterlou!, that focuses on stories about my scooter, pictures of her and other little Honda Metropolitans I encounter, and other scooter-related stuff.

You can find it here!

So, when most people think of scooter riding, they don’t usually think “wow, having some music would make this ride even better!”  Most people don’t generally think of convoluted ways to add speakers to their scooter, either.  (I mean, come on, motorcycles have radios, how come Scooterlou didn’t come with one standard? Heheh.)  Well, I guess you could say I’m not most people, heheh.

I will preface this with a little bit of explanation – I absolutely LOVE music.  Almost as much as I love reading books.  I try and find some way to work music into whatever I’m doing – I listen while I’m at work, while Bryan’s driving somewhere, while I’m cleaning the house, while I’m typing blog entries… In fact, I think I just managed to crash my PS3 by trying to see if the Google Play Music site would work on it.  (Apparently not.)  Music is just a part of who I am.  And once I finally got over my general nervousness about riding Scooterlou, I thought, “There’s gotta be some way I can listen to music on this thing.”

My first attempt at making Scooterlou musical was a weatherproof speaker that ran on batteries, and connected to my phone through Bluetooth.  There wasn’t really a good place to actually put the speaker, so I ended up resting it on the floor and bungee-cording it to my basket.  I’d tested the speaker out in the house, and it got pretty loud, so I figured it’d work fine!

Boy, was I wrong.  When Scooterlou’s engine gets going, she’s pretty darn loud – so loud that even when I had the speaker cranked up as loud as reasonably possible, I could barely hear it when idling, forget about while I was actually riding.  It was a bummer – I spent a chunk of change on that speaker, and while it does come in handy in other situations (like when we’re giving the scooters baths, or when I’m in the shower, or if we ever go camping again), it’s not the best idea for scootering.  I resigned myself to someday spending a ridiculous amount of money on a sound system for my little Honda Metropolitan… and then I came across this.

One of my new friends runs a scooter shop (it’s Wick’s Wheels, for any locals who are interested), and one day I was poking through the helmet selection when I stumbled upon this wonderful thing.  It’s a helmet – with Bluetooth speakers and a mic.  While I’d never ever be brave enough to answer the phone while riding my scooter, the fact that it can connect to my phone (which has a lovely unlimited data connection and can hook right up to my Google Play All-Access Music collection) was what sold me.  MUSIC ON MY SCOOTER.  It was finally going to happen in a safe way!  YES.  So, I bought it.  And after having to return the first one because the port for the plug to charge said helmet was a little messed up in the first helmet, I found out this is exactly what I need.  It doesn’t need to be loud enough for everyone on the road to hear it.  I’m the only one who needs to listen to Daft Punk’s Get Lucky on repeat ninety million times. 😀

I think, if I were to assign my website a mascot, it might just be Scooterlou.  She may not exactly be the nerdiest mode of transportation – I mean, come on, scooters are for everyone! – but she is decked out pretty nerdily.  She’s got a nice little Nyancat on one side, and a sweet “Engineered by Firefly” sticker on the other, and she’s rocking some My Little Ponies on her trunk (not pictured here – this is before I installed the trunk on her).  She enables my nerdy crafting pursuits, too – if not for her, it’d be a lot harder to get to and from craft stores, as my hubby’s not exactly always keen on schlepping me back and forth to craft stores around town.  I’m rather attached to her.