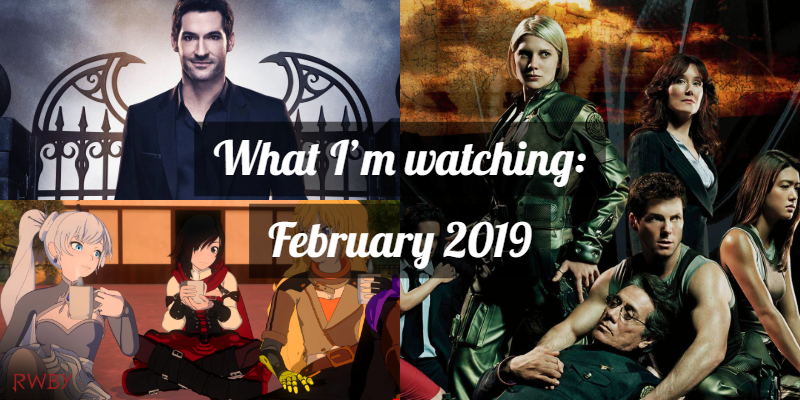 I’m back with another edition of What I’m Watching! This month, I’ve got three shows in my TV-watching rotation, although what with being sick this week, I’ve been binge-watching the heck out of one of these shows.

First off, I’m still working my way through Battlestar Galactica – somewhat slowly, because Ross and I have had a busy couple of weeks at work and by the time we get home, we don’t have much energy to process an exciting and action-filled episode of BSG.  We’re just about to season 3, though, and I’m still loving the show!

Another show I’ve been watching this month is RWBY! You might remember that I started watching this last year, and I ended up having to take a break from it because I had a bit of RWBY overload. Now I’m watching it again, and I’m up to season 5 – where things are starting to get even more serious.  And seriously badass.  I won’t mention more because I don’t want to spoil it for anyone (and also because my brain is fuzzy on the details, curse this nasty cold). I’ll just say you should watch it for yourself.

Now, to the show I’ve been binge-watching while I’ve been miserably sick this week: Lucifer. I stumbled upon it through Netflix’s suggestions for things I might be interested in, and a week or so ago, I figured “eh, what the heck, I’ll watch this while I knit.” And I fell in love with it.

Lucifer is a comedy/crime drama with a dose of fantasy thrown in the mix for good measure. It follows the story of Lucifer Morningstar, the devil himself, and his adventures after leaving Hell to set up a nightclub in Los Angeles – and help solve crime as a consultant for the LAPD. He’s partnered up with Chloe Decker, a detective who seems to be immune to Lucifer’s charms. He’s got irresistible sex appeal, and can make you tell him your deepest, darkest desires just by looking into his eyes – yet none of that works on Chloe, and Lucifer’s very curious about why that is.

With a great cast and a great story, Lucifer has been making my week home sick with this miserable cold much better than I thought it would be.  If you haven’t seen it yet, you should check it out – the first three seasons are on Netflix, and season 4 should be coming out soon!