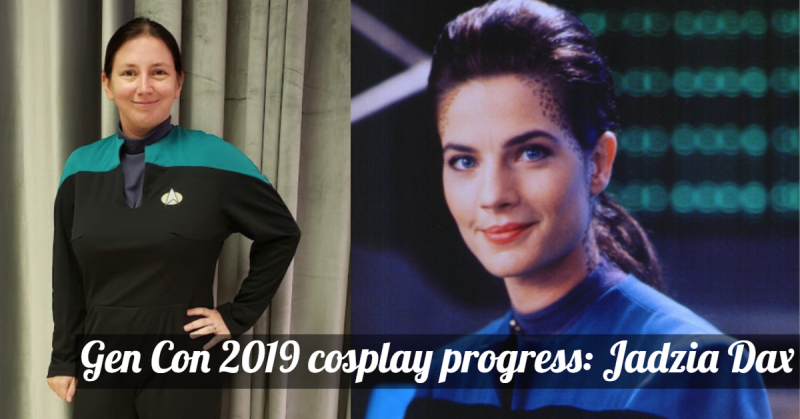 Folks, take a look at the awesomeness that is my newly-altered Starfleet uniform for my Jadzia Dax cosplay! I love it so much. (I just need to figure out what to do with the turtleneck dickie to make it lay flat…)

I think it’s safe to say my Jadzia Dax cosplay is ready for Gen Con! Or just about ready, anyway. I picked up my uniform (as you can see), bought the makeup I need, and now I just need to figure out how to style my hair. (It’ll probably involve some hairspray and a curling iron, I think…)

Plus, I got some practice drawing trill spots recently! It was a lot easier to paint them on than I’d originally thought! I decided to switch to brown liquid eyeliner instead of black, though, to make it a little more natural looking. I’ll likely test out the trill spots in brown this weekend. For those who might be wanting to do trill spots of their own, I’ll put together a tutorial the next time I do a trill spot test run. (I might even try to make it into a video!)

I’m so incredibly excited about this costume, folks. While it’s nowhere near as elaborate as last year’s Sailor Moon costume, it’s still pretty dang awesome – I’m excited to get to be Jadzia Dax for a few days at Gen Con! As I’ve said before, Jadzia is my favorite Star Trek character, and cosplaying her has been something I’ve wanted to do for a while. I can’t wait to see what people think of her at Gen Con this year!