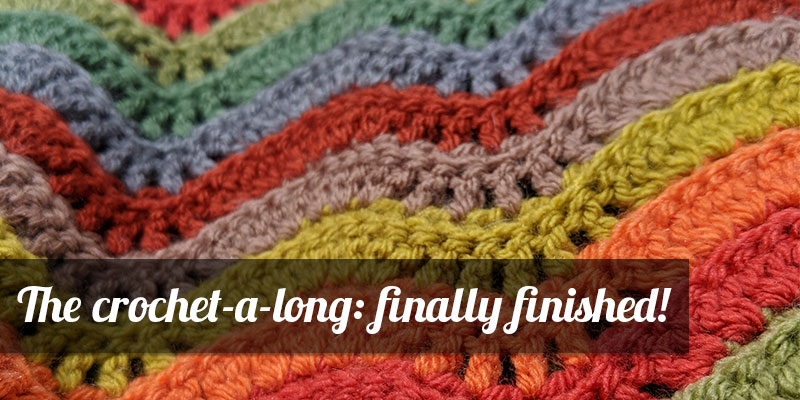 Well, it only took me six months instead of the two that the Woodland Blanket crochet-a-long was originally planned to last, but I finally finished!

I’ll admit, some of why it took so long to finish was because I kept getting distracted by other projects.  Which happens a lot to me, and which is why I’ve got piles of unfinished stuff all over the house. (From what I can think of off the top of my head, I’ve got two unfinished cardigans, two unfinished pairs of socks, one shawl I’m actively knitting, one I’ve got stashed in a box until I feel like working on it again, a third that’ll be the focus of a blog post next week, and a pile of stuff in the “Corner of Shame” that will probably never get done.)  And the more I let the Woodland Blanket sit forlornly in my craft basket, the guiltier I felt about not finishing it, especially with so many other projects I wanted to do.  And I only had 8 stripes and the border left to do.  So I sat down one weekend and cranked it out.

It’s not a hard blanket to do at all, especially once you get the hang of translating UK crochet terminology.  The wave pattern is soothing and rhythmic to work on, and I absolutely love the colors.  The whole blanket looks fantastic, and I’m glad I resisted the temptation to just stop a few rows short from the end and call it done.  It’s the first big thing I’ve finished in a while, and I’m so proud of myself for sticking with it.

If you’re interested in making one of your own, the pattern is free on Attic24 (there are plenty of pictures included that walk you through the pattern) and if you want to create it in the same color scheme, you can buy the yarn pack here.

I was on a really good posting streak there for a while, wasn’t I?

And then my brain got in the way and decided “hey, let’s focus on everything that’s NOT the blog!”  And silly me went and followed it down a bunch of rabbit trails.  I started three craft projects, in addition to the two unfinished pairs of socks and poor neglected Sailor Moon quilt.

And then Kishar started back up again, which meant I got to don my elf ears and red dress again and run around as Ëlinyr the Sun Elf for a weekend!

Then there are the cosplay ideas Ross and I have been coming up with for the conventions we’re going to.  (I’m not going to post about them, because it seems that any time I post about costumes I want to do for conventions here, I never end up actually making them, like Toothless and Rose Quartz…)  And of course I get wrapped up in those and get excited for conventions, and all the fun that comes along with them.

And then I remember my poor neglected blog, and feel bad.

Then something else distracts me, and off I go!  *sighs*

So that’s where my brain has been lately, folks.  Lost in a bunch of ridiculous distractions.  I need to actually develop a blog posting routine – set down a day and time every week to write some stuff.  Even if it’s just “hey, I’ve got nothing this week, so here, have some pictures of dogs dressed up in costumes”.

Speaking of which – yes, it’s old, but I do love seeing Pudge dressed up as the Eleventh Dogtor.

What this rambly post boils down to, I think:  I’m still here, I’m still distracted by everything, but I’m gonna try my darndest to put new blog posts out on a regular-ish basis.  There’s definitely no shortage of things I want to post about, like my idea for turning a Wingspan Shawl into a Toothless shawl.  Or how ideas for keeping track of my yarn tourism fun.  And don’t forget about how I managed to read through almost all the Dresden Files books this year – that merits a post of its own, I think.

There I go, getting distracted again!  Anyhow.  Expect some more regular posts from me – and feel free to pester me if you don’t see anything for a while.  Friendly reminders from readers are always welcome, hah.

Well, the Woodland Blanket crochet-a-long I posted about a little while ago came to a close a few weeks ago.  How’s my blanket looking, you ask?

Well, even though the crochet-a-long wrapped up recently, I’m still 11 or 12 stripes away from finishing the blanket.  I managed to keep up with the rest of the group pretty well for the first month or so, and then my ADHD caught up with me and my brain said “hey, let’s find something else to work on, we’ve worked on this blanket for like a month straight, so let’s do something new and exciting!”

So I started a pair of socks.

And then I dug out a cardigan that I’d started a few years ago and hadn’t finished yet.

And then I decided to go back to another pair of socks I was working on and do some work on those.

And then I felt guilty about not working on the blanket and went back to working on that for a little bit, but then got distracted by socks again.  I know I’ll finish that blanket soon – I keep telling myself that I’ll finish it after I finish the socks with the zigzag pattern, that I won’t start any more projects until I get some others finished.  Will I actually be able to stick to that, though? Who knows.

Anyhow, I’ll post about the blanket when I get it finished, I promise.  And I will get that finished.  I’m determined. 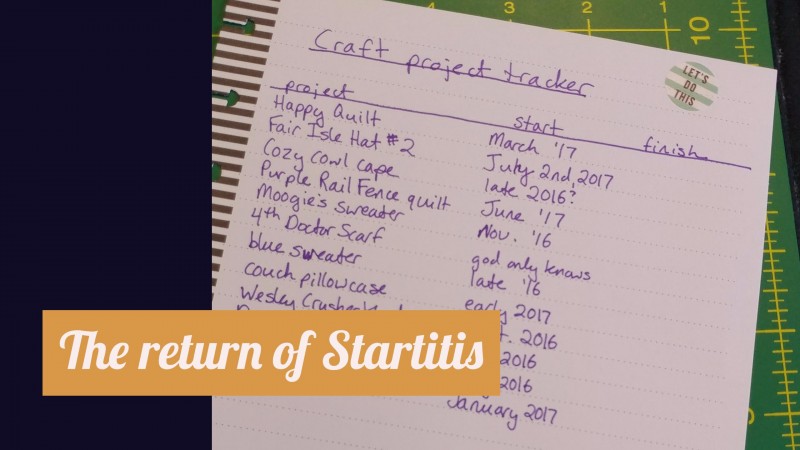 Well, to be completely honest, it probably never left in the first place.

As part of me trying to get some craft projects actually finished instead of lurking around my craft room or piled in the closet, I made a list of what I know I’ve started and haven’t finished yet.  And I gave myself an ultimatum: no spending money on craft supplies until I finish a good chunk of these projects.

How many of you out there have startitis?  I’m sure you all know what I’m talking about…

I know I’ve got one heck of a pile of unfinished projects stashed in my closet – in fact, this post is going to showcase some of the more interesting projects I’ve got stashed away, thanks to the ridiculous case of chronic startitis I have.  (I think it’s terminal, to be honest…)

First off, the knitting/crocheting projects – there are so many of them, they’re not even getting their own individual introduction – I’ve just lumped them all together here for convenience, haha.  It’s just so easy to start a new knitting or crocheting project!  All you need is some yarn and a pair of knitting needles or a crochet hook – sometimes, I don’t even need a pattern.  I just wing it.  (I also love how I have two scarves in the same pattern there, and didn’t even realize it until I went to dig out all these projects)

Next is the massive pile of punch embroidery projects in various stages of completedness – I sometimes get struck with an amazing idea, work on it with wild abandon for a few days, then get distracted.  Often by another craft project.  Told you my startitis was terminal.  Especially for many a project that just ends up languishing in a closet or a bucket.  Projects of note in this pile include the Doctor Who punch project I’ve been working on for… what, four years now?  I really should finish that and turn it into a pillow or something…  Also, the fact that there are three pieces that are just outlines on fabric, well, that’s a travesty.

Then we come to sewing.  I am actually SO CLOSE to finishing this apron, too!  I’ve been working on it for about three years, which is depressing, considering I turned out the skirt for my Pinkie Pie cosplay in what, an afternoon?  I need to get this one done too.  Besides.  It’s coffee themed.  How can I not finish it?

I think needlework projects, especially those of the counted cross-stitch variety, are the ones that end up victims of startitis the most.  I’ve got, what, four or five projects here, in various stages of completion, and one of which that’s been hanging around since 2007.  They just look so pretty in their packages, and I think “oh I can get this one done while I watch TV”, and it never happens…

And I have one project that doesn’t even involve sewing or embroidering or anything – and that’s not done yet, either!  This one hasn’t even been started! I may work on this one this weekend, though.  Because the world needs more no-sew blankets.  Especially with Rainbow Dash and Applejack on them.  You know it. 😀

I end up starting way more projects than I finish – if this post were about the projects I’ve actually finished, this would be a much shorter story.  In the past year, I think I’ve finished… let’s see here.

My friends keep bringing things I’ve finished to my attention that I’ve forgotten here – everything added in green is something I made and I forgot to add.  Which means maybe my case of startitis isn’t as bad as I thought it was?  Anyway… when I get bored and whiny about not having any craft projects to do, I’m just going to look at my startitis pile and work from there, instead of getting anything new, no matter how tempting it is…